The spatial join function st_join uses a logical predicate to join features, and is also also affected by this speedup.

There have been attempts to use spatial planar indices, including enhancement issue sfr:76. In rgeos, GEOS STRtrees were used in rgeos/src/rgeos_poly2nb.c, which is mirrored in a modern Rcpp setting sf/src/geos.cpp, around lines 276 and 551. The STRtree is constructed by building envelopes (bounding boxes) of input entities, which are then queried for intersection with envelopes of another set of entities (in rgeos, R functions gUnarySTRtreeQuery and gBinarySTRtreeQuery). The use case was to find neighbours of all the about 90,000 US Census entities in Los Angeles, via spdep::poly2nb(), which received an argument to enter the candidate neighbours found by Unary querying the STRtree of entities by the same entities.

A simple benchmark shows the obvious: st_intersects without spatial index behaves quadratic in the number of geometries (black line), and is much faster for the case where a spatial index is created, stronger so for larger number of polygons: 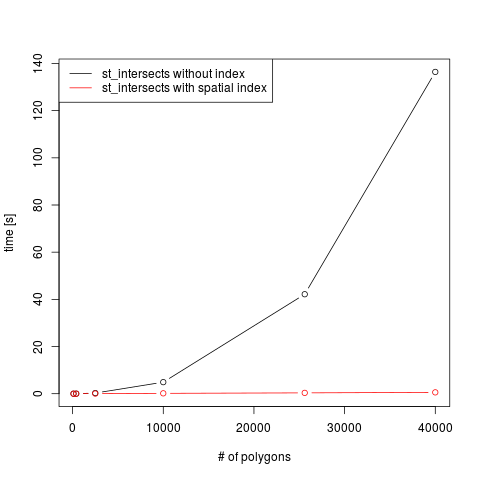 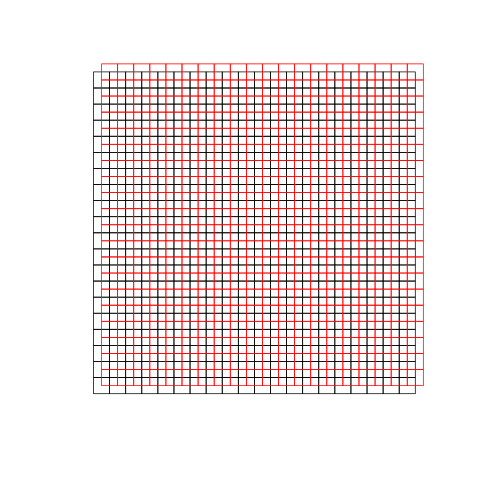 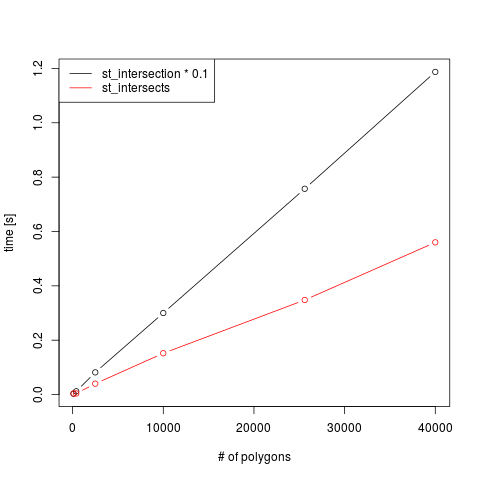 Spatial indexes are available in the GEOS library used by sf, through the functions starting with STRtree. The algorithm implements a Sort-Tile-Recursive R-tree, according to the JTS documentation described in P. Rigaux, Michel Scholl and Agnes Voisard. Spatial Databases With Application To GIS. Morgan Kaufmann, San Francisco, 2002.

The sf implementation (some commits to follow this one) excludes some binary operations. st_distance, and st_relate without pattern, are excluded as these need to go through all combinations, returning a dense matrix. st_equals_exact is excluded as approximate matches are sought, without constraining the degree of approximation.

On which argument is an index built?

The R-tree is built on the first argument (x), and used to match all geometries over the second argument (y) of binary functions. This could give runtime differences, but for instance for the dataset that triggered this development in sfr:394, we see hardly any difference:

The resulting feature sets int1 and int2 are identical, only the order of the features (records) and of the attribute columns (variables) differs. Runtime without index is 35 minutes, 20 times as long.

Is the spatial index always built?

In the current implemenation (version >= 0.5-1) the index is always built, except for st_distance, and st_relate without pattern. This means it is also built e.g. for rook or queen neighborhood selections (sfr:234), which use st_relate with a specified pattern.

What about prepared geometries?

The followinig script was used to create the benchmark plots. It no longer works; in the version where it worked, prepared = FALSE would take a branch where no trees were built, this is no longer the case.