Submitting a package to CRAN is always an adventure, submitting a package with lots of external dependencies even more so. A week ago I submitted the simple features for R package to CRAN, and indeed, hell broke loose! Luckily, the people behind CRAN are extremely patient, friendly and helpful, but they let your code test on a big server farm with computers in 13 different flavors.

Of course we test code on linux and windows after every code push to github, but that feels like talking to a machine, like remotely compiling and testing. CRAN feels different: you first need to manually confirm that you did your utmost best to solve problems, and then there is a person telling you everything still remaining! Of course, this is of incredible help, and a big factor in the R community’s sustainability.

Package sf is somewhat special in that it links to GEOS and GDAL, and in particular GDAL links, depending on how it is installed, to many (77 in my case) other libraries, each with their own versions. After first submission of sf 0.2-0, I ran into the following issues with my code.

That was it! The good message

with lots of helpful hints. Indeed, my package generated Rcpp files and manual pages dynamically during install; this requires Rcpp and roxygen2 to be available unconditionally and they aren’t.

So I sat down and worked on 0.2-1, to address this. Before I could do that, an email from Oxford (Brian Ripley) arrived, telling me that sf had caused some excitement in the multi-flavor server farm: 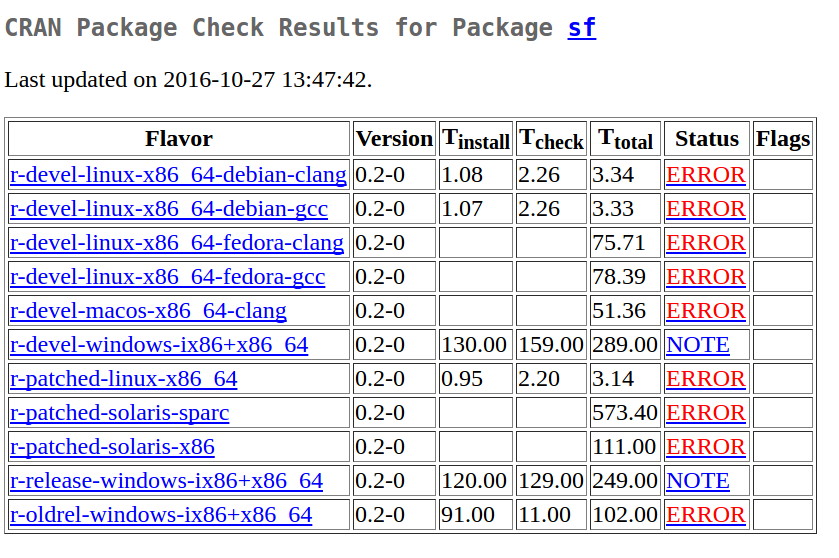 Here, it should be noted (again) that the only two NOTEs were due to the excellent work of Jeroen Ooms who compiled GDAL and many other libraries for rwinlib, and prepared sf for downloading and using them. The rest was my contribution.

In addition, an issue was raised by Dirk Eddelbuettel, telling me that his Rcpp reverse check farm had noted him that sf required GDAL 2.0 or later, but not by properly checking its version but by generating plane compile errors. The horror, the horror.

sf 0.2-1 tried to address the Rcpp and roxygen2 problems: I took their generation out of the configure and configure.win scripts. I added all automatically derived files to the github repo, to get everything in sync. Worked:

… and no emails in the evening.

Also, the errors on Solaris platforms were caused by the SQLITE library not being present, hence GeoPackage not being available as a GDAL driver. As a consequence, I had to set back the examples reading a GeoPackage polygons file to one where a shapefile is read. Bummer.

Another issue was related to relying on GDAL 2.1 features without testing for it; this was rather easily solved by conditional compiling. 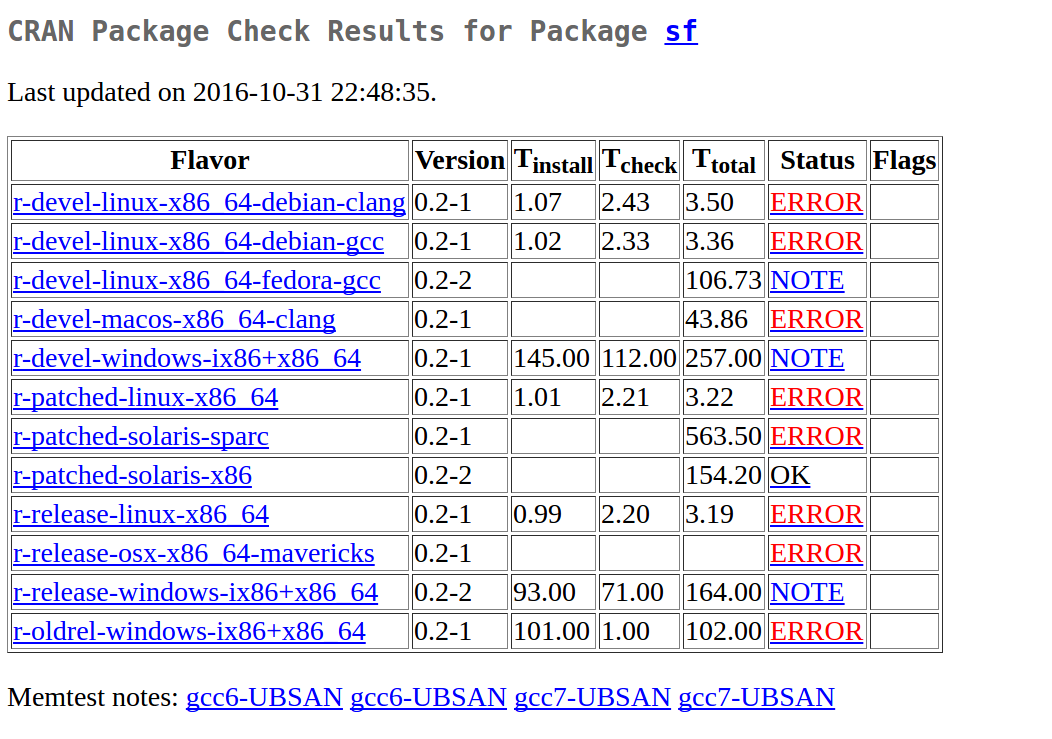 meaning SOME improvement, but where do these UBSAN reports suddenly come from!?

Over-optimistically as I am, I had commented that life is too short to do byte swapping when reading WKB. Welcome to the CRAN server farm. Solaris-Spark is big-endian. Although the R code reading WKB does read non-native endian, this would have required to rewrite all tests, so I added byte swapping to the C++ code, using a helpful SO post.

Sounds scary? What I had done was for every coordinate use a double pointer, pointing it to the right place in the WKB byte stream, then copy its value, and move it 8 bytes. I love this *d++ expression. But you can’t do this anymore! Although the code worked on my machines, you can’t put a double pointer to any location and assume it’ll work everywhere. The solution was to memcpy the relevant bytes to a double value on the stack, and copy that into the Rcpp::NumericVector.

All these changes have brought me here: 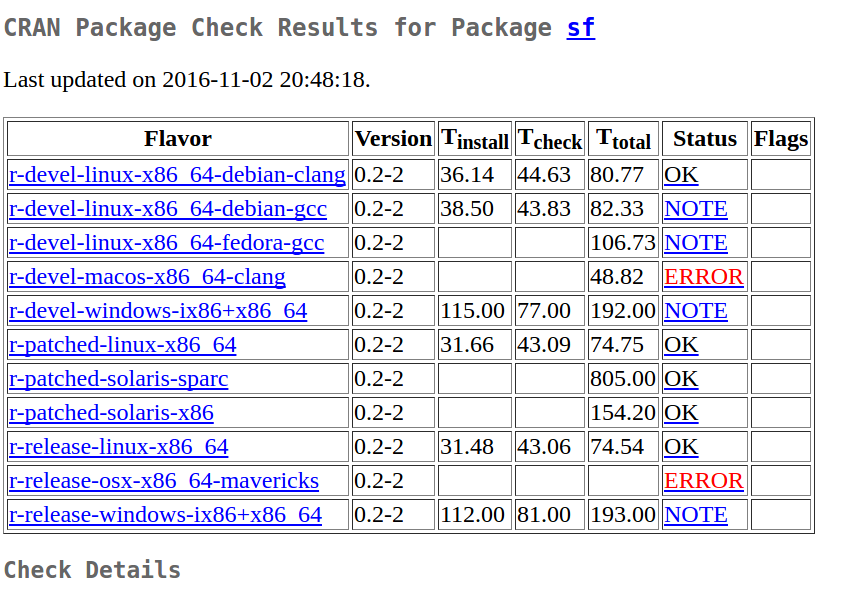 where you see that linux and Windows compile (all NOTEs indicate that the library is too large, which is unavoidable with GDAL) and that errors are Mac related:

which indicates a problem with GDAL not linking to the HDF5 library (unsolved).

CRAN flavors is a great asset that teaches you problems of all kinds at an early stage. Without it, users would have run at some stage into problems that are now caught up front. Thanks to the tremendous effort of the CRAN team!!