Last August, at the geostat summer school organized by Barry Rowlingson in Lancaster, I took the opportunity to learn about modern approaches to modelling health data in an excellent worskhop held by Teresa Smith on Basic methods for Areal/Spatially Aggregated Data. Slides, data and R scripts are found from Teresa’s course page. Let’s first download the data, directly from Teresa’s site:

For a given disease, analyzing disease data typically starts with the raw data, which has as

So far, I could follow it – this looks like a pretty simple weighting exercise. Then came Teresa’s script to do all this.

I read function expected, I read its documentation, I read the function again, and didn’t understand. I now do; it tries to compensate for all the lost structure, in a fairly convoluted way.

have areas as rows, and age classes as columns. The equation

averages over areas, and calls for the ratio of the column-wise sum vectors of these matrices, which we get by

where as.vector (or alternatively, (N %*% Pc)[,1]) takes care of storing the column matrix as a vector in the data.frame.

So, two lines of code which, if must, can be contracted to one, and no need for external packages. Indeed,

Finally, we can compute and plot the SIR by 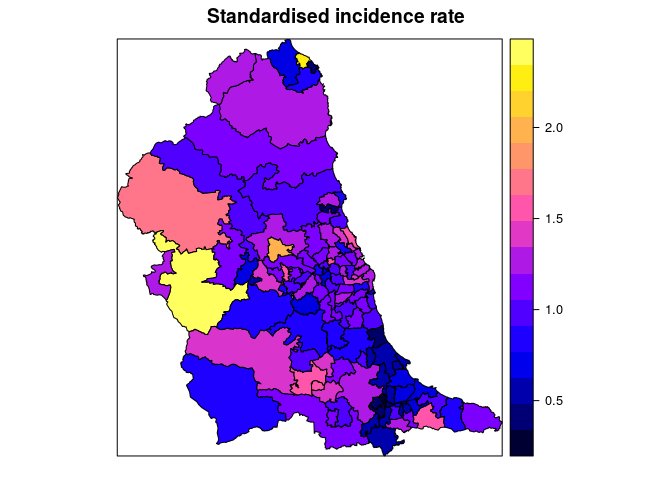 Of course Teresa’s original approach could be written way more elegantly and tidy using the same basic approach. She explained it was inspired by code from people who mainly work with databases. To me, the short two-liner solution looks more like the equations in which the problem was expressed, and that makes it the better approach. How would the math look like that, translated to R, leads to the long solution?

Tidying data is a great idea, but shouldn’t be confused with forcing everything into long tables – this would degrade R to a relational database. I’m fully with Jeff Leek that many tidy data are not in long tables, and haven’t even started mentioning the analysis of spatial, temporal, or spatiotemporal data.

Operating R the new way, using dplyr, tidyr and friends is a cool idea. Writing code that obfuscates simplicity is not.

Is it better to use less packages?

The easy way solution above used base R without the need to load packages; the hard way required three packages to be loaded first. The new R way critically relies on, and promotes using packages for many tasks that can also be solved by base R.

Packages are there to be helpful. Some of them are also highly dynamic, get modified (improved!) over time, get abandoned, or replaced by others. I often ask myself ``will this code still run in 10 years from now, with the R version we will use by then?’’ – or 20, or 50 years? Of course, by that time one could try to compile historic R versions and install historic packages, but that might be non-trivial and require historic compilers or run-time environments. I’ve been using R for nearly 2 decades, and S-Plus before that, and know where I put my bets.

This year the geostat summer school will be in Albacete, hosted by Virgilio. Of the 106 applicants, 60 will be selected. I’m looking forward to meeting lots of new people, and learning more and new cool things!